I just ordered some anime DVDs, including a preorder for Mazinger Edition Z: The Impact!, a series whose English subtitle release had originally been announced with the title Shin Mazinger Z Impact, which seems to make more sense in English even with a word left untranslated. 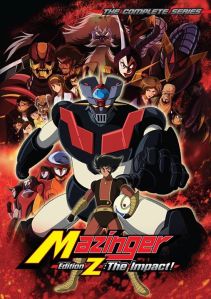 END_OF_DOCUMENT_TOKEN_TO_BE_REPLACED

“An anime you wish never ended and continued on”

Not too long ago, it was announced that Naruto is ending soon; that’s not my answer, it’s just a good reminder that even the longest series eventually end. Of course, some series are better suited to have indefinite lengths than others.

So I’m going to split my answer here.

END_OF_DOCUMENT_TOKEN_TO_BE_REPLACED

“Anime you want to see but haven’t yet”

A lot, but if I had to narrow it down to three:

Kill la Kill – The first series made by Studio Trigger, who also made the short Little Witch Academia, and was founded by the series director of Gurren Lagann. Credentials like that that make me confident that Kill la Kill’s place as one of the most popular anime of the last few years is well deserved.