Gundam may be considered the start of the real robot genre, but it wasn’t really intended to start a subgenre from the start; it wasn’t until Super Dimension Fortress Macross in 1982 that the real robot genre was fully established; this was the first one with no trace of “super prototype” or anything like that; at least when it comes to the main mecha. (If you count the ship as super-ish, then the first mecha anime to avert it entirely was Armored Trooper VOTOMS in 1983.) 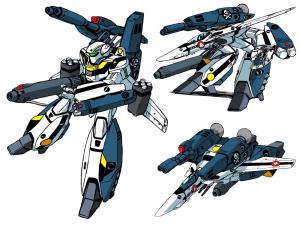 Macross transformed the whole idea of transformation, with planes that actually looked like planes transforming in ways that were actually physically possible.  And the Ground Effective Reinforcement of Winged Armament with Locomotive Knee-joint, or GERWALK mode, is where a trend of weird acronyms in anime started.

But of course there’s more to Macross than cool planes. It was also a story of culture shock, and Minmay was one of the first anime idols. Hikaru, Misa, and Minmay are also one of the most famous love triangles in anime.

Combat Mecha Xabungle, another Tomino series, was the first series to have the protagonist get an entirely new mecha halfway through, and technically a post-apocalyptic anime slightly older than Fist of the North Star, though it would be inaccurate to say it influenced it. Despite the setting it’s actually one of Tomino’s lighter series.

If “real” and “super” are considered a sliding scale, then Armored Trooper VOTOMS is at the extreme of the “real” end. In fact, it took making it’s Vertical One-man Tank for Operations and ManeuverS (yes, that’s really what it stands for) un-super and vulnerable so far that you could end up questioning whether they’re even portrayed as useful enough to have been worth making. They are also pretty much the smallest humanoid mecha that can be mecha you sit in, as opposed to suits you wear.

Additionally, the Scopedog from VOTOMS‘s resemblance to the Zaku from Gundam is intentional (in fact, they have the same designer, Kunio Okawara), one of several reasons why I would put the Zaku along the Gundam itself on any simple list of the most iconic individual mecha.

Aura Battler Dunbine should probably be considered the first fantasy series with mecha (though a case could be made for calling Beast King Golion fantasy), and sort of the first anime based on a light novel, The Wings of Rean by Yoshiyuki Tomino (I told you I’d be mentioning him a lot), though despite being directed by the author, it’s really more “inspired by” than an adaptation.  (The Wings of Rean got an actual anime over 20 years later, still directed by Tomino.)

And as early as 1985, there were already series combining elements of the real and super genres. Dancouga (also often romanized as “Dancougar”) itself is unquestionably a super robot, but the setting and characterization are much more in line with the real robot shows that were far more common at the time. With mecha that had three modes (vehicle, animal, robot) each and all combined into one robot, it could be considered the height of the transforming trend. It was also highly unusual in that the title combined robot didn’t even appear until nearly halfway through the series!

And then, Gainax and Hideaki Anno came along, and things got a lot harder to describe. The Japanese title of Gunbuster translates to Aim for the Top!, and is a combination of the titles of the shoujo tennis manga Aim for the Ace! and the movie Top Gun, which aren’t exactly things most people would think of mixing together.  It sort of has real and super robots in the same setting, but with the very Getter-like Gunbuster as the main robot, and time dilation as a central plot element, it is arguably the closest anything can be to a hard science fiction super robot series.

I don’t think there’s a moment in this clip that hasn’t been homaged or copied (even if you don’t count Gurren Lagann), and there’s a reason for that; it’s 120% hot-blooded awesomeness. (However, the badass armfold commonly called the “Gunbuster pose” was actually done by Getter Dragon first.)

Skip ahead a few more years, to 1991, and you find a Game Boy game with a simple premise; what if Gundam, Mazinger Z, and Getter Robo all fought together? Crossovers weren’t entirely new; in fact there had been Mazinger Z/Getter Robo crossover movies in the 70’s, and the final boss in this game was even from one of those movies. But this time, something clicked; the game simply titled Super Robot Wars was the humble beginning of a series that would become vast in every since of the word, from the number of games in the series, and the number of systems it’s been on, to the number and diversity of sources those games would use characters and mecha from; and it is a candidate for the number 2 spot in “game series with the biggest influence on a major anime genre”.

The influence of Super Robot Wars on anime would be threefold. First, the least direct, simply being included in a SRW would often raise the profile of lesser-known older series and lead to remakes. Second, SRW also raised the profile of Shin Getter Robo (which had appeared in the manga but not anime), and Mazinkaiser was originally created by Go Nagai for SRW so Mazinger could keep up with Getter; the anime OAVs featuring these robots thus owe their existence to SRW just as much as the actual SRW anime (which there are several of) does. Finally, SRW has been homaged in several anime that aren’t even about mecha; Magical Girl Lyrical Nanoha A’s even went so far as to have a major character (Signum) based directly off Lamia Loveless from Super Robot Wars A.

1992 saw the first episode of a highly acclaimed OAV, Giant Robo: The Day the Earth Stood Still, based (loosely) on the manga I mentioned in the first post, and establishing Yasuhiro Imagawa as another name to remember. Imagawa was told he couldn’t use any supporting characters from the manga or tokusatsu versions, so instead he got permission to use characters from Mitseru Yokoyama’s other works and basically make a homage to his entire career. The result is a wuxia-like anime that happens to also have a giant robot in it. Giant Robo was the first deliberately “retro” anime, and widely credited with inspiring later reimaginings, and it, Gunbuster, and the early SRW games were more or less the only things responsible for keeping super robots around as anything more than an increasingly toyetic kids’ genre during the period between Dancougar and Evangelion.

Next time: Oh crap, I have to describe Evangelion.