Last year I did a list of unusual transformations that are still among my most popular posts, so here’s an addition to it.

Oh, and here is a more complete article about the McDonalds Changeables, which I included on the previous list but had difficulty finding much about.

One of the original Transformers. I mentioned him as a side note in the previous list, but didn’t think race cars should take more than one spot on the list. But after completing the list I was made aware of something I hadn’t known. 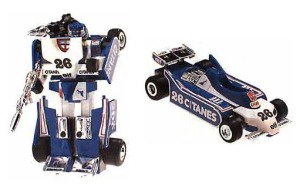 Formula 1 cars cannot drive on normal roads. I don’t mean they just aren’t street legal; they literally can’t drive on any road that has a “crown”, or on any surface that isn’t completely flat.

(Mirage does manage to drive on regular roads in the cartoon despite the fact that the real vehicle he looks like can’t, but this could only be accomplished by some kind of inaccuracy, and is only one of several factors that make him by far the most conspicuous of the original Autobots.)

Another freak from the live-action Transformers movies. In Revenge of the Fallen, there’s a scene where a variety of appliances come to life and start causing trouble. This particular one is a blender, hence “the blender guy”. You can figure out the other part yourself.

Why am I choosing him to represent the appliance bots? Because his name is Dickbot the Blender Guy.

(Technically it comes from DVD commentary and probably isn’t an official name, but it’s the closest thing he has to one.)

Gaiking was actually created by Go Nagai, but Toei cheated him out of getting any credit for it. Though he’s created so many other, more classic works that he probably doesn’t miss this one that much.

It says right there on the box under the Shogun Warriors name; “He’s a Samurai! He’s a robot skull!” It does not say what the advantage is of being a robot skull.

(I’m naming the Shogun Warrior version specifically because Mattel never released the DX Daiku Maryu. In the anime, Gaiking became the head of the giant robot dragon…years before Transformers had the Headmasters (or existed at all).)

And speaking of toys older than Transformers, there was Diaclone, the toyline that a lot of the early Transformers originated in. One difference between Diaclone and Transformer versions of the same toys was the little pilot figures, because unlike Transformers, Diaclone toys were supposed to represent piloted mecha rather than sentient robots. And that’s why even the Dinobots had little seats. But not all Diaclone robots became Transformers. 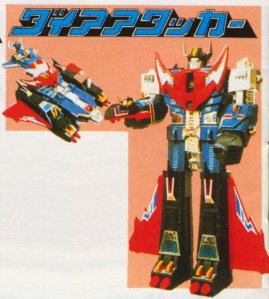 This is the Dia Attacker. It’s one of several Diaclone mecha to have a certain serious flaw; it can’t be transformed with pilots in the seats! Remember this is supposed to be a piloted mecha, not a Transformer.

There have been all sorts of weird Japanese crossover Transformers toys. There’s a Donald Duck/Bumblebee/Herbie figure, and “Eva-01 is a retool of Hello Kitty” is an actual honest fact! But this is the strangest of them all.

Garigari-kun is the mascot for a Japanese brand of ice pops similar to Popsicle. This toy transforms from one of these not-Popsicles to a cross between this advertising mascot and Optimus Prime. He uses a not-Popsicle stick for a sword. And where the Optimus Prime that was a shoe wore his own alt-mode, I guess this one can…eat his? This also came in three “flavors”; blue “soda”, brown cola, and purple grape.

This is tied with the McDonalds ice cream cone in the impracticality and ridiculousness of what he turns into…but at least Turbo Cone didn’t have a terrifying face with a mouth as wide as her shoulders.