For a video game, the distinction between “main” and “supporting” can be pretty clear; in most genres, anyone who’s not playable (and isn’t an enemy) is a supporting character. It can still get a little blurry, though, with really major characters like Zelda. (Or really minor playable ones in some games.)

This might be stretching the definition a little since she tags along with the player throughout the entire game, but she’s not really a party member in gameplay terms. Ruby from Lunar: Eternal Blue. 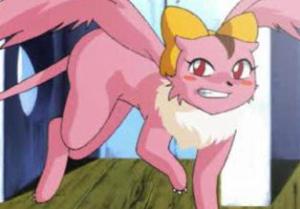 This sarcastic baby red dragon has a lot of the best dialogue in the game. She’s got a crush on Hiro, which is kind of creepy since she’s a dragon and he’s a human, though Lunar’s dragons can learn to shift into a human form too. She is also somehow able to carry around a ridiculous number of items in the Sega CD version of the game, and occasionally swoops down to finish a weakened enemy.